Inspired by a recent post on Grant’s site, in which he alludes to the many challenges of product photography, I decided to create a challenge for myself. I wanted to see what level of photorealism I could achieve with the Cinema4D Physical Renderer and a few simple 3D objects by recreating Grant’s product shots.

To begin, I intentionally chose the simplest bottle from his series of shots and recreated it in Cinema4D. The bottle and the virtual wine inside are simple splines inside lathe nurbs, meaning they consist of a total of about 20 points spun around or “lathed” into the 3D shapes you see here. The stopper is a couple cylinders with the appropriate materials applied. I’m still a beginner with Cinema4D, so creating the bottle and cork took more than an hour to get just right using Grant’s photo as a guide. I could probably recreate it in 10 minutes now that I have more experience with the bezier curve tool.

(At this point I should thank the Greyscale Gorilla for the awesome tutorials, without which none of this would have been possible. Thank you, Nick and Chris!)

My next thought was to recreate the label exactly, but that quickly morphed into something else. 🙂 The label and foil textures were created from scratch with PhotoShop and a few Custom snowflake shapes from the Symbol palette. Since Cinema4D can use native PSD files with layers an alpha channels intact, this work was easy. I tweaked the PS files and applied the changes in Cinema by simply reloading the modified image. Nice!

The final render was done with the wonderful Cinema4D Physical Renderer. This made it easy to apply a tiny bit of depth of focus to match Grant’s shot. (One of my early renders had the camera focused on the bottle instead of the label, leading to the label being the tiniest bit out of focus. This slight imperfection resulted in perhaps the most realistic-looking render of all. I’m sure there’s a lesson in there somewhere …) 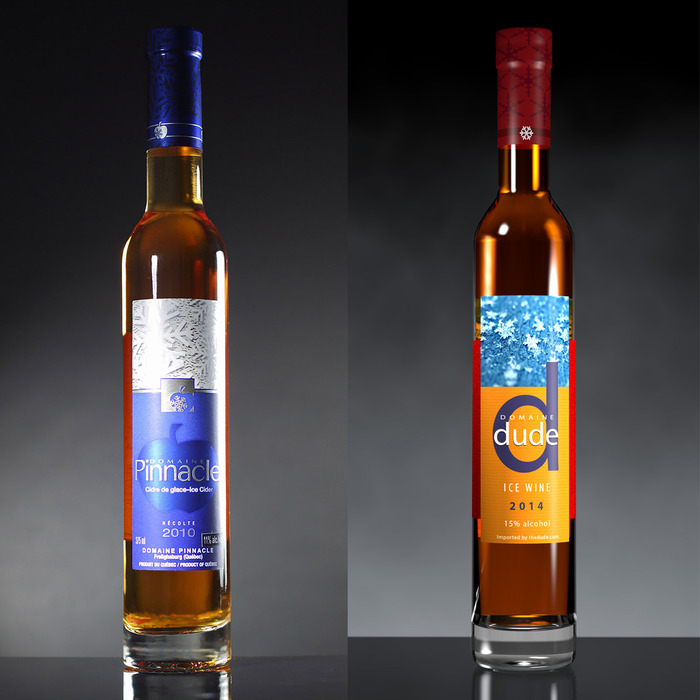 Click here for a full-resolution view of the rendered 3D bottle.

My conclusion is that in some cases, it’s easier and probably cheaper to get great-looking results in the 3D realm than with a camera. Among the many advantages:

This is fun. More to come!